What I Did and How It Works: The Microgame Jam

You can view the source code for the jam here.

Here’s the quick overview for making a game and adding it to the Microgame Jam:

Step One: Import our GameController.unitypackage file.

Step Three: In your Unity game, use the GameController class (imported from the GameController.unitypackage file) to get information about the state of the player. Like how many lives they have, what the difficulty should be, etc.

Step Five: You’re done programming! Now export ALL the assets for that game to a .unitypackage file.

From the developer’s point of view, that’s fairly easy, right? But there’s a lot of stuff going on at the back end. For instance, how do we pass the information from one game to the other? Each minigame is a separate scene, so won’t loading one minigame cause us to lose data from the other? What if a game doesn’t call our GameController’s Win function or Lose function? How do we store lives and pass that to each minigame? Let’s talk about the implementation of GameController.

There are actually two Game Controllers:

Okay, so now that we have the Game Controller set up, here’s the back-end process for getting all the games to work:

Step Six: Import the .unitypackage file from ALL the microgames.

Step Seven: Add all the scenes from the microgames into a master list of scenes to load on the fly.

Step Eight: When the game starts, create the GameController Singleton to store a universal count of lives, score, deaths, etc.

At least, that’s how it was supposed to work in theory. Let’s break down what went wrong with each of these steps.

And then when I did import all the .unitypackages, I saw a ton of file conflicts. One of the rules we specified during the Microgame Jam was that you should name your assets “GameName_AssetName” to avoid conflicts with any other files that might be similarly named from other games. “This is also fine,” I thought, “We can just rename any file conflicts as they appear.” And so we did. And it didn’t turn out to be that bad. But it gets worse.

One of the assumptions I made was that developers would typically stick to one scene. Oh no. One team decided that they’d like to have THREE scenes as part of their Microgame. So I had to make sure that only ONE of their scenes could be loaded during Step Nine. This didn’t prove to be problematic at the time. You’ll see this gets much worse during Step Nine, though.

Some developers didn’t understand the Singleton concept. I saw some scripts where people were creating their own instance of GameController, or just calling the functions wrong. So for a lot of the Microgames, I had to go in and make sure that they were calling the Singleton functions correctly. This was more bothersome because: a lot more games had this issue, so I had to spend more of my time fixing simple function calls. So I had to adjust their code when it was imported.

Originally, the Microgame Jam build was loading in scenes synchronously. So any time you load a microgame, the entire game will pause and wait for that game to load. But someone suggested that we load in one microgame while the other was loading. We’d already had some difficulty getting this set up, but I thought “Hey, I can implement this, no problem!” So I delved into the nightmare that is

When you play a collection of microgames, you don’t want to have to look at a loading screen while Unity loads in the next game. You want to see a funny animation, and then start playing right away. That’s where asynchronous loading comes in. While you’re playing through there’s also part of the game that’s dedicated to loading the next minigame.

Additionally, most people play games on the web, and asynchronous loading is a great way to make sure that they get into playing FAST.

So, I created a quick system to load in the games. Easy, right? While Game #1 is playing, load Game #2 in the background. When Game #1 is done, load Game #2. Except no, because threads are the worst. As anyone who’s ever tried to make one thing happen while doing another thing will tell you, “Run time errors suck, and I hate them. I hate them. I HATE THEM. DIE! DIE! DIE! DIE!”

I’m paraphrasing, but it’s true. Asynchronous loading worked out for the first few test scenes I had set up, but both I and the developers of the microgames made things infinitely harder for me.

Problem One: Me. I made things worse.

Someone else, someone that wasn’t me, made an animation in Adobe Illustrator to play during the transitions. If you play through the current build of the Microgame Jam, you’ll even see it! 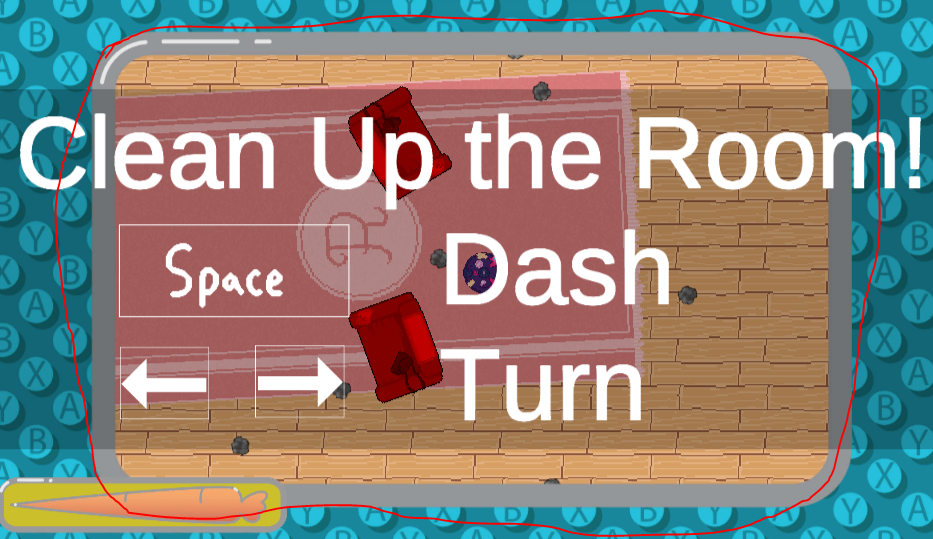 The problem with this intro is that at the end, it’s transparent (as you can see above). So the idea is:

This was nightmarish to debug, mainly because Unity scenes are not designed to be loaded, unloaded, and then paused. You have to specifically set up the scripts in your scene to make sure it doesn’t conflict with the script you’re using for asynchronous loading. And guess what?

There’s no accounting for the amount of features that someone will bring in to their game engine. You remember Step Seven, right? Where I mentioned that someone decided to add multiple scenes? That was a problem. The game had to transition in between scenes for those two extra scenes to load, and so all the other scenes were unloaded. Then when I fixed the loading code to be asynchronous, even more things broke.

Some games decided to create objects during the beginning of their scene. While this is a normal thing for Unity (It’s the Start(){} function you get from every default Unity script), it absolutely broke how those scenes loaded in the Microgame Jam build. So I had to go in and fix everything manually.

This problem was so bad, it even interfered with

The asynchronous code really messed things up. A lot of submissions ended up creating these weird edge cases that I always had to fix, and because I was making constant changes to the framework, it was not as solid as it was when I first tested it out.

To make matters worse, we got the Singleton code from online somewhere (the source is in the Singleton.cs file on the Github), and it was riddled with weird peculiarities that made implementing the Singleton slightly more difficult, like the fact that we could create multiple copies of the Game Controller Singleton (the purpose of a Singleton is that it is meant to be unique).

Basically, it’s a bad idea to implement asynchronous loading if you’re not 100% in control of what you’re about to load. Step Nine was the worst thing by far because every time I fixed something wrong with one game, it typically ended up breaking how another game loaded. I eventually fixed most bugs, but it certainly left a delay in between the end of the jam and the release of the final build.

Oh, and don’t give people access to a framework unless you’re 100% certain it’s working to your satisfaction. I’ve since learned about test driven development, and it’s a much better alternative to “wait until something goes wrong, THEN fix it.”

Don’t get me wrong, despite the amount of bugs, this whole project was AWESOME to work on. And I’m constantly brainstorming ways to improve it. Here’s a whole list:

With all of this in mind, I have some pretty great potential improvements. For those, you’ll just have to wait and see (assuming we ever do this again).

Thank you for taking the time to read this, and remember that run time errors suck.